.
You are here: Home / What's In the Theatre / Samuel L. Jackson Thrilled with ‘Snakes on a Plane’ Sex Scene 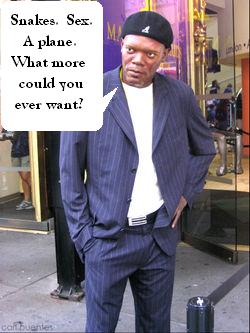 Samuel L. Jackson isÂ tickled pink thatÂ theÂ anticipated summerÂ action film Snakes on a Plane was called back for re-shoots so that movie execs could add more profanity & sex to the film.

Jackson felt that the mid-air thriller should be grittier & is delighted they added a mile-high-club sex scene.

Jackson states,Â “There’s always the obligatory nude scene somewhere, where the guy’s creeping up on the people making love.

“In this instance we have the snake creeping up on two people joining the mile-high club.”

He adds, “This is the kind of film that I would have gone to the movies on Saturday, to the first screening, to see as a kid and I’d stay all day, watching it three or four times and me and my friends would have been freaked out.”

Until the third time you watch it & you think, “Gee.Â  This is just aÂ simple-plotted movieÂ about snakes on a plane trying to kill people.”