.
You are here: Home / Career Moves / Rosie O’Donnell is Back & Taking it to ‘The View’ 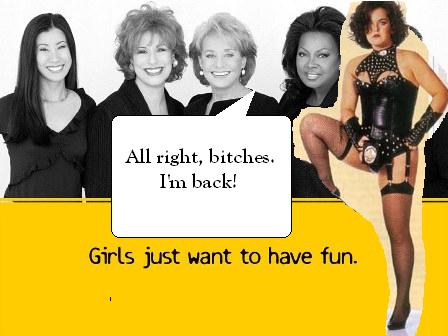 You love her, you missed her, former talk show host Rosie O’Donnell is setÂ to return to our TVs as the new co-host of The View.Â Â

The comedienne let loose her own daytime show in 2002Â so she could concentrate on raising her children with partner Kelli.Â

According to reports,Â Â ABC execs will announce the news that Rosie willÂ take over Meredith Vieira’sÂ role who is leaving to co-anchor the Today show.

Everybody Loves Raymond’s Patricia Heaton and news reporter Connie Chung have also been linked to the co-host availability.Â  Apparently the winner was decided via mud fight and O’Donnell won with a surprising S & M studded leather whip to Chung’s backside.