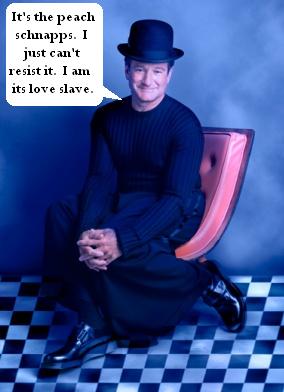 It looks like alcohol relapses are the in thing these days.Â Â Following in Mel Gibson’s footsteps, actor & comedian Robin Williams has gone public with his latest battle with alcoholism.

After tabloids reported that Williams had checked into a rehabilitation facility last month for a drinking binge, Robin came out of the drunk closet & said he had started drinking again while filming The Big White in Alaska two years ago.Â I can understand that, it was a terrible film.

Williams’ publicist says,Â “After 20 years of sobriety, Robin Williams found himself drinking again and has decided to take proactive measures to deal with this for his own well-being and the wellbeing of his family.

“He asks that you respect his and his family’s privacy during this time. He looks forward to returning to work this fall to support his upcoming film releases.”

You know, I don’t think I would be able to tell a drunk Robin Williams to a sober one.