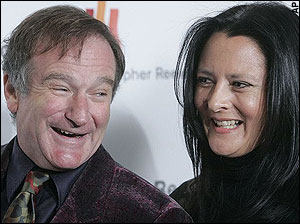 Even comedian Robin Williams will find little to laugh about the recent turn of events. Marsha Garces Williams recently filed for divorce because of “irreconcilable differnces.” They had been married for 19 years. They have two kids: Zelda, 18, and son Cody, 16.

This is Williams’ second divorce.

The separation also ends their working relationship; Marsha had been the producer of several of his films, including Jakob the Liar, Patch Adams, and Mrs. Doubtfire and worked as his “assistant” on films like Dead Poets Society. Prior to that, she was his nanny.