.
You are here: Home / Mischief & Mayhem / Rapper Fabulous Shot in Manhattan Then Arrested 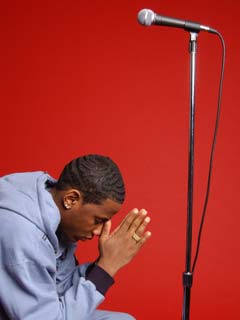 Fabulous rapper Fabolous was shot in the leg earlier today as he stood in a Manhattan parking garage.Â

28-year-old rapper John Jackson, aka Fabolous, was shot one time in the right thigh by an as-of-yet unidentified male whoÂ walked up to Jackson & hisÂ his posse shortly afterÂ theyÂ left an event at Diddy’s downtown restaurant, Justin’s.Â  Wow, that’s a full evening, dinner at Justin’sÂ & a shooting.Â

After a hail ofÂ gunfire, FabolousÂ & his posse hopped into a white Dodge Magnum & sped away, running a red light on the way which attracted the attention of police responding to shots fired.

Â The officers stopped theÂ Magnum & found not only Fabolous & his posse, butÂ two unlicensed, loaded guns.Â  Oops, forgot about those.Â  FabolousÂ &Â gang were then arrested and hauled off to the police station.

Police officers are still looking for that shooter and Fabolous was taken to a local NYC hospital where he remains in stable condition.

This isÂ not the first brush with the law for Fabolous who was arrestedÂ in March 2003 on charges ofÂ criminal weapons possession.