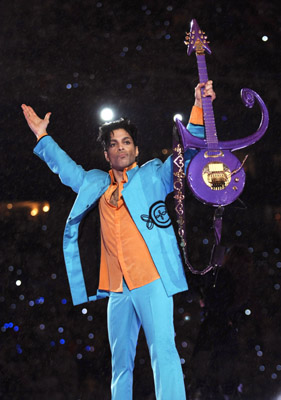 Diva singerÂ Prince performed at Sunday night’s Super Bowl XLI half time show & my was it, ummm, something special.Â  Apparently Prince still has it, whatever he had to begin with, he still has, which I’m not really sure what it is that he actually has.

Anyhoo, Prince took the Super Bowl fans into a medley of his tunes, including the ubiquitous Prince tune Purple Rain.Â  The football event took place at the Dolphins Stadium in Miami, Florida amidst continuous rain that didn’t stop until just about the end of the game.

The Indianapolis ColtsÂ & Chicago Bears battled it out to the end, leaving the Colts a much needed victory of 29-17.Â  Finally Peyton Manning can get this whole Super Bowl thing out of the way & Prince can continue to do whatever Prince usually does.

I’m so serious, why do we even like Prince?

Thanks to WireImage for the image.