.
You are here: Home / Career Moves / Prince Michael Jackson Gets a TV Job

Barely out of his teens, Prince is now venturing showbusiness, a move his late father Michael jackson would most likely not approved of.

Doing push-ups for the ratings, not a bad start for Prince. “I’m looking to become well-rounded as a producer, director, screenwriter and actor” The young lad tells ETs Brooke Anderson. 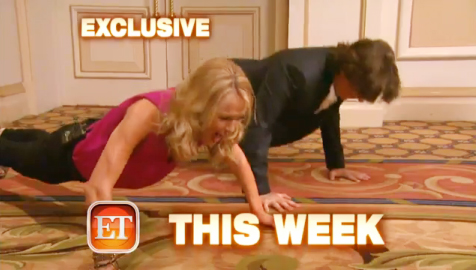 The King of Pop made it his mission in life to keep his children away from the spotlight. But now just like his sister Paris, Prince is joining the family business and starting early, stepping up the game with a TV gig interviewing celebrities.

His first interview is with the cast of the movie Oz The Great And Powerful with James Franco and Zach Braff and director Sam Raimi.

Prince is pretty much used to the cameras, ‘I’ve been raised around stuff like this so it was different being the interviewer instead of the one being interviewed.’

During the interview Prince came off pretty grounded and mature for his age, he then refers to his late dad MJ- ‘That’s what most of my people say. That was all thanks to my dad. He raised me right.’