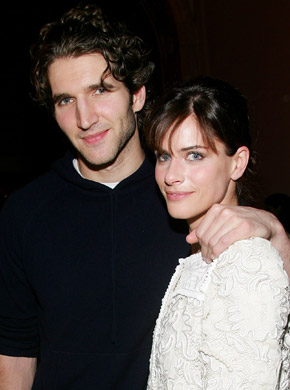 Pregs actress Amanda Peet has confirmed that she & her fiance David Benioff will tie the knot this weekend.Â  The pregnant Studio 60 star will marry screenwriter Benioff in a small ceremony sometime over the weekend.

Wednesday Peet made an appearance onÂ The Late Show with David LettermanÂ and confirmed that she is four months’ pregnant (OMG, she is so huge!) and talked a bit abour breaking the news to her Studio 60 cast members.

Peet reveals, â€œI was a little nervous to break the news to everyone, but the thing that fascinates them the most, I think, is just — they’ve taken to calling me ‘fatty.'”
Â
â€œThat’s just not right,â€ LettermanÂ interjected.
Â
34-year-old Peet Replied, â€œI think it’s really funny.Â  [Studio 60 creator] Aaron Sorkin is convinced I have a five year old in here or twins or something.

“All they do is call me fatty and whenever I’m not on set theyâ€™re like, â€˜Check craft services – she’s probably over stuffing herself again.â€™â€

Peet said that she & Benioff will have a small wedding ceremony before about 140 guests.
Â
â€œIt’s a big week, Peet stated.Â â€œI have been having recurring nightmares about not the ceremony, but the party. There sort of adolescent fears of just being lame, of having a lame party.â€
Â
Just what are Amanda’s nightmares?Â  â€œI go to the bathroom and I come back to the party and everyoneâ€™s gone. Except for some everyoneâ€™s dispersed there’s a few distant uncles of David’s left. And another one where the band just didn’t show up so everyone got board. And I was begging musicians that I know to just ‘Play! Play something!â€™â€
Â
Poor, pregnant Amanda.Â  I’m sure no one will leave her wedding, maybe she has an issue with these uncles?