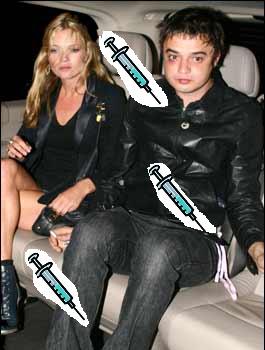 Well, you knew it was bound to happen, don’t act so surprised.Â  Babyshambles frontman Pete Doherty just got out of the Priory rehab center & it looks like it didn’t help at all.

“He emerged on Monday looking healthier than I have ever seen him. But yesterday he was seen visiting a chemist in Dublin to buy two hypodermic needles. Pete was staying at the cityâ€™s Morrison Hotel with girlfriend Kate Moss. The supermodel joined him on his sell-out Irish tour, which ends tonight at the Heineken Festival in Waterford.

But yesterday lunchtime, before a gig, he left Kateâ€™s side to sneak out and buy his secret package. At 12.05pm he walked into Health Express chemist in Millenium Ways, Dublin, on his own. Wearing a scruffy white T-shirt and black suit, he left minutes later putting a bag containing two syringes into his top pocket.

Oh, Pete.Â  What are you doing to yourself & your talent?Â  We know you don’t have diabetes.Â  Kate Moss– I hope you have some damn sense & aren’t going to marry this sack of needles.