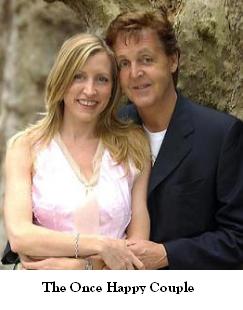 A statement issued by the former Beatle and his second wife said they had â€œfound it increasingly difficult to maintain a normal relationship with constant intrusion into our private lives.â€ The brief statement said that â€œwith sadnessâ€ the couple agreed to â€œgo our separate waysâ€ but said the parting was â€œamicable.â€

â€œSeparation for any couple is difficult enough, but to have to go through this so publicly, especially with a small daughter, is immensely stressful,â€ the statement said. â€œWe hope, for the sake of our baby daughter, that we will be given some space and time to get through this difficult period.â€

The lovely couple married in 2002 & have a 2-year-old daughter Beatrice.Â  Wow, I have to say I kinda thought this one was going to last.