.
You are here: Home / Mischief & Mayhem / Paris Hilton Trades Car for Bicycle, No DUI in Sight 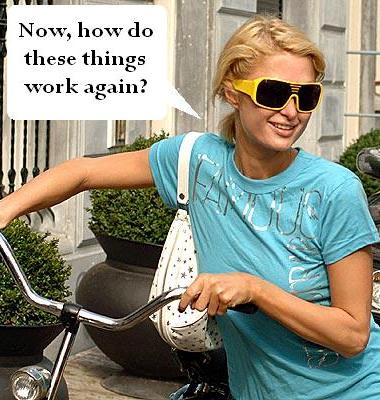 After being officially charged withÂ a DUI Wednesday for that bit of erratic drunk driving on September 7, Paris Hilton trades her silverÂ Mercedes-Benz for aÂ two-wheeler.

The socialite was spotted in Amsterdam (look out, Netherlands, Paris is in town!) switching gears to a less reckless type of transportation.Â  I’m giving Paris a little credit there, I thought she’d be too lazyÂ to bike.Â  Maybe she’s paying someone to push her up hills though…..Â