.
You are here: Home / Mischief & Mayhem / Paris Hilton to be Drawn & Quartered by High Court 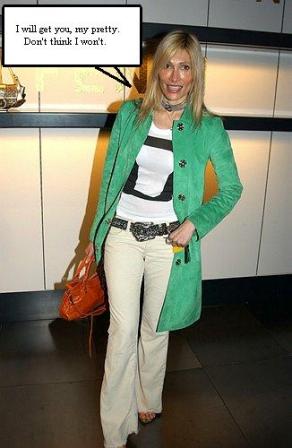 THE FIGHT OF THE HEIRESSES:Â  Paris Hilton is set to spend the month of September in court where she is to answer the charges of slandering Greek actress Zeta Graff.Â  The hotel heiress & leg-spreader stands accused of spreading “vicious lies” about 34-year-old Graff.

Graff filed suit against Hilton last year claiming that the reality TV starlett fabricated a fight with Graff in a London nightclub.Â  The Greek actress’s case was strengthened during a reposition in December when Hilton’s ex-publicist (she has a lot of exes, doesn’t she?) Rob Shuter admitted he had planted a news item with the New YorkÂ Post’s gossip column per Hilton’s request.

Diamond heiress Graff states she will win the case saying, “Hilton will learn a valuable lesson about what happens when you try to ruin another person’s reputation.Â  I look forward to her explaining all of this to the jury.Â  And I look forward to watching her pretty, American face screaming in agony as the horses gain speed against the ropes tied around her small, little insignificant limbs as she is quartered.Â  Ha ha ha ha ha (evil laughter emanating from Greek vocal cords).”

So, I might have embellished a wee bit, but I think they both had it coming to them.Â  Is this really the fate of our legal system as we know it, to be time-wasted by petty little bitches?