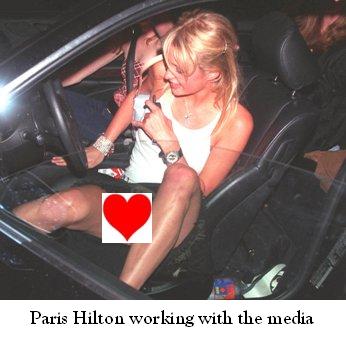 Hilton encouraged the young pop star to try & cooperate with the paparazzi & not antagonize them (withÂ your crotch).Â  The hotel heiress & general all-around, do-gooder claims she sympathizes with Spears’ plight with the media, but that the best way to handle the stick-to-you-like-glue photographers isÂ to not get a gun, but to smile & work with them.Â Â

Let’s let Paris explain, “(The paparazzi) annoy me, too.

“I can understand going to a press event or a premiere that’s fine, they’re there, but when they’re waiting outside your home every morning and following you around every single day it’s hard.

“I’d rather them just take pictures at events, not at my house.

“I think it’s better just to smile than when people give the middle finger or are rude to them, because that’s what they want you to do.

“They want to get a bad picture.”Â  (Or if you’re like me, a picture of my firecrotch).

I believe these statements by heiress Paris are shaking the very roots of irony & I wouldn’t be surprised if that old, familiar tree came tumbling down after this tenacious effort by Hilton.