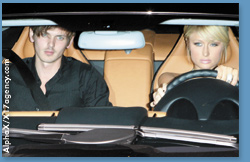 It looks like Paris Hilton has a new man at her side, surprise, surprise.Â  Hilton has set her sights on Canadian-born model James Neate.

Ahhh, the carefree life of celebrities.Â  I’d like to see how the Sizzler would take it if I started dancing on their tables.