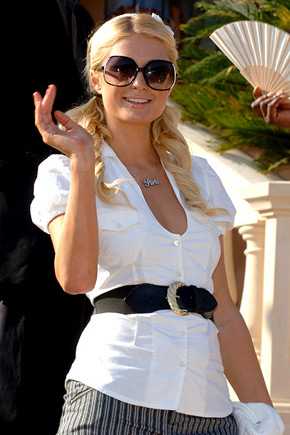 You know, most people get a DUI, then get into a load of trouble & paperwork.Â  MostÂ people get a DUI & get caught drivingÂ on a suspended license, you probablyÂ don’t hear from them for a damnÂ while.

But if Paris Hilton gets caughtÂ driving her luxury carÂ on a suspended license, she calls onÂ her fans & CaliforniaÂ governor Arnold SchwarzeneggerÂ toÂ helpÂ herÂ attain a get-out-of-jail-free card or something.

Hilton, in a last-ditch attempt to keep her skinny ass out ofÂ jail, is endorsing an online petition anyone &Â everyone can sign.Â Â  Paris has teamed up with her pal/fan Joshua to aid her in this so-sad attempt at grasping at straws.

On her MySpace page, Hilton posts, “My friend Joshua started this petition. Please help and sign it. I love you all!”

The petition is addressed to Gov. Schwarzenegger & claimsÂ  that “the American public who support Paris are shocked, dismayed and appalled by how Paris has been the person to be used as an example that drunk driving is wrong.

“She provides hope for young people all over the US and the world. She provides beauty and excitement to (most of) our otherwise mundane lives.

Well, at least it’s ballsy or something.Â  ‘Hope to young people all over the US and the world’?Â  WTF?Â  Yeah, like hope to see what a mess Paris’ life is & steer right around that train wreck!