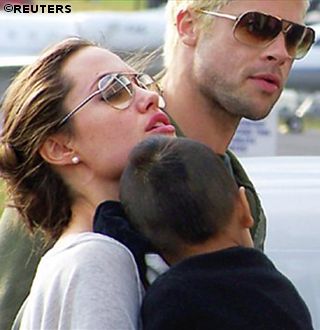 Paris cafe worker Ahmed Shrir has us all wondering about the so-called happy couple Brad Pitt & Angelina Jolie.Â  Apparently Brad is an unhappy Parisian camper and the relationship is on rocky ground since they moved into a less than desirable tower block in Paris.

ShrirÂ told the British newspaper Daily Mail, “Brad is a really nice guy, but he’s not too happy about this area.Â  He says Angelina wanted to live in an ordinary Paris district, and that his security people put them in the high-rise block.Â

Although Brad’s great with the kids, he says there’s nowhere for them to play properly and they’re both very worried about the pollution.Â  There are hundreds of cars going by day and night, not to mention the trains.Â  Brad came over here to get away from it all.Â  He finds Angelina very demanding and doesn’t seem to be very happy with the way their lives are going.”

I guessÂ Brad was usedÂ to the luxury he & ex-wife Jennifer Aniston shared in their $25.5 million California estate.Â  But I’m not sure which is more unbelievable- that Brad would divulge this much personal information to his cafe server, that two of the world’s sexiest people who just happen to be in a relationship together are unhappy, or that the Daily Mail found a French citizen that was actually helpful and communicative.Â  You tell me.