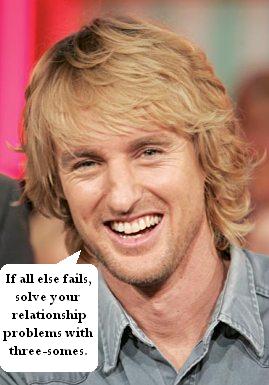 AsÂ I’m sure you’ve noticed, we here at Celebrific haveÂ had aÂ few server glitches these past few days.Â  But never fear, we threw the old servers out of a fast-moving train, vigorously stomped on them, set the afire & let Hulk Hogan loose on them.Â  We now have bright, new, shiny servers that have promised never to disobey or disappoint us.Â  Thanks for your patience, and now to the news.

Well, it looks like Owen Wilson is following in the footsteps of his brother Luke where the ladies are concerned.Â  Owen’s romance with You, Me and Dupree costar Kate Hudson came as a surprise (although we predicted it here at Celebrific) to many folks, none more than his Los Angeles public relations executive girlfriend.

Apparently the relationship between Wilson & the exec was even heating up, enough for her to tell pals that the two were getting serious.

When the news broke that Kate Hudson had separated from husband Chris Robinson after six years of marriage & that the word on the street was that Golden Stallion Wilson had something to do with the breakup, the LA exec got a little nervous.

A source states, “They had been dating. She thought they were going to the next level, until it broke about him and Kate.

“She’s pretty upset, but everyone knows he’s a dog.”