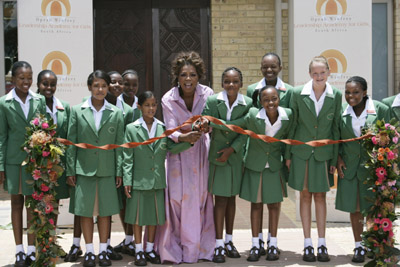 Oprah Winfrey opened her school for disadvantagedÂ girls in South AfricaÂ Tuesday with a ribbon-cutting ceremony that capped off a five-day long celebration with 200 of her closest celebrity friends.Â  Â

“I wanted to give this opportunity to girls who had a light so bright that not even poverty could dim that light,” Winfrey revealed to reporters.

The Oprah Winfrey Leadership Academy for Girls is located in the small town ofÂ Henley-on-Klip, south of Johannesburg.Â  The school is a result of a promise Winfrey gave to Nelson Mandela six years ago.Â  It looks like Oprah comes through on her word.Â

What do you think- Would Oprah Winfrey make a good head mistress?