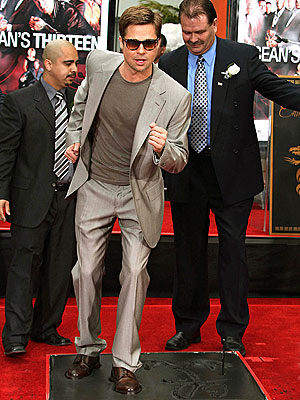 That Brad Pitt, he sure can be a super silly guy.Â  The Ocean’s Thirteen star was spotted doing the running man of all things for some unknown reason on Tuesday.

Pitt was seen at the infamous Mann’s Chinese Theater in Hollywood, in Dolce & Gabbana no less, celebrating the L.A. premiere of the latest & hopefully last Ocean’s film.Â  Why the heck was he doing the damn running man?Â  He is so very, very white….