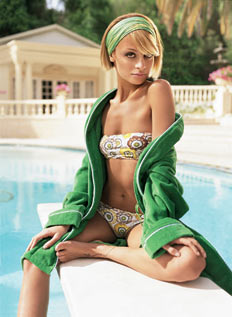 Simple Life starÂ Nicole Richie has made peace with her weight loss and gas faced up to the fact that the ‘I’m just naturally thin’ line isn’t fooling anyone.Â Â Richie opens up to Vanity Fair saying that she is afraid that young women who see her as a role model would aim to have her sleek, blowing-away-in-the-wind figure.

Richie reveals, “I know I’m too thin right now, so I wouldn’t want any young girl looking at me and saying, ‘That’s what I want to look like.'”

The socialite actress pleads that her weight loss is not due to an eating disorder and that she has sought medical advice.Â  Richie states, “I started seeing a nutritionist and a doctor… I do recognize that I have a problem, and I want to be responsible and fix it, and I’m on that path right now.”

But the docs aren’t convincedÂ Richie’s weight loss isn’t due to anorexia.Â Â In an upcoming Vanity Fair article one of her medics, Jeffery Wilkins, informs us, “If it’s not anorexia, she should be able to gain the weight. If it ends up being anorexia we can help her with that.”

So, either way it looks like Nicole Richie is on the right track to avoid having a string attached to her legs and being flown like a kite.Â  Now if she can only find a way to mend that broken Paris Hilton relationship…Â