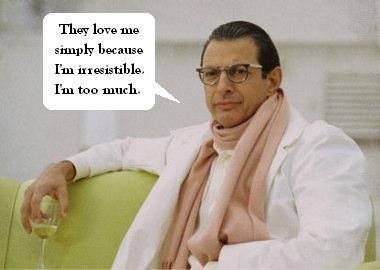 Richie recently broke off her engagement with on & off again boyfriend / fiance DJ A.M., real name Adam Goldstein & is now enjoying the benefits of freedom by dating her childhood dreamboat, Goldblum.

The, if you will pardon my wording, hilarious coupleÂ have been spotted about in Hollywood lately & in a recent interview Richie stated that she’s had a crush on theÂ black-locked actor since she was 13.

Goldblum was at one time married to Geena Davis, how did he ever land her?, & was engaged to B movie star favorite Laura Dern.Â  He was, until quite recently, engaged to another 24-year-old, a dancer by the name of Catherine Wreford.Â  After a whirlwind romance, the couple engaged each other following a touring stage production of The Music Man.