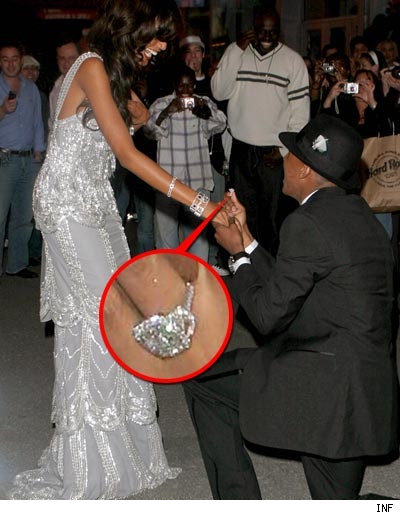 TheÂ Metropolitan Museum of Art Costume Institute Gala wasn’t just about costumes & glitz, it would seem.Â  It looks like rapper Nick Cannon had something up his sleeve the whole night long.

After the gala Cannon & longtime girlfriend Selita Ebanks wereÂ driven out toÂ Times Square in a Rolls Royce Phantom.Â  But it wasn’t until the two-story Jumbotron read, “Selita will you marry me?” that Nick took out a beautiful 12-carat ring & asked his Victoria’s Secret model to take his hand in marriage.Â  And of course, Selita gave a hearty, Yes!”

Wow.Â  Talk about your public engagement, that’s a whole gaggle of people taking pictures of the couple & enjoying the spectacle.Â

But that wasn’t the end of the evening, Cannon took his new fiance to NYC hotspot Butter where he surprised her by having her parents & best friends flown in for the event.Â  Okay, the boy gets points there, big points.Â