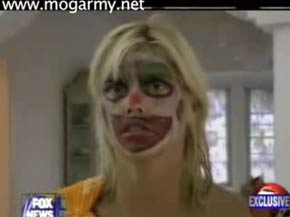 A new Anna Nicole Smith video has surfaced, thanks to the diligent folks at TMZ (see video here).Â  Â The video shows a semi-functional Anna Nicole speaking in a baby voice with badly painted clown makeup on her face, clearly on some type of drugs.

Howard K. Stern mans the video tape & even goes so far as to say that the footage would be worth a lot of money.Â  Wow, that Howard K. is such a stand-up guy, you know?

The stammering tape of Anna Nicole aired Monday night on FOX New’sÂ Greta Van Susteren’s showÂ & was supposedly shot when Smith was eight-months pregnant.Â  Hmmm, I hear doing drugs while pregnant isn’t so good for the child.Â  But maybe that’s just what big brother wants you to believe, Anna.

As Howard K. Stern shoots the footage, he continuously asks her, “Is this a mushroom trip?” To which Anna Nicole Smith can only say, “Huh?”

What do you think of Howard K. Stern now?