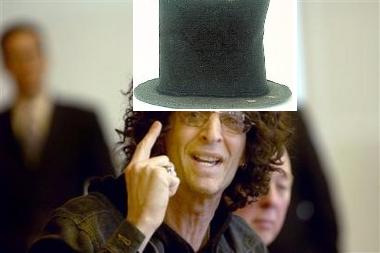 Abraham Lincoln was a man before his time- wise, genuine, humble, fortunate, a perseverer.Â  Howard Stern, however, is a man of his time and not really wise or humble, he isÂ financially fortunate and a sexual perseverer, but quite honestly, he looks like a head coming out of Janet Jackson’s vagina.Â  You see it now, don’t you?

Well, little Honest Howie is being sued by CBS’s radio division.Â  They claim that the hilarious and endearing jockey breached his contract when he started working for Sirius Satellite Radio last month.Â  The lawsuit also states that Stern improperly used CBS radio’s air time to promote his new show with SiriusÂ and claims that Stern discussed his plans with the satellite radio company without disclosing them to CBS, as required by his contract.Â

Stern counters their accusations by advancing that CBS officials knew of his plans to shill for Sirius and gave approval for his references to satellite radio on the air and did nothing to stop him when he spoke about it on his show.

The above pic of Stern is taken at a news conference yesterday where Stern discussed the case against him.Â  He unprecedently spoke eloquently, and straight from the heart.

“Members of the world:Â Â I amÂ becoming an institution of the country;Â that isÂ useful in more ways than one;Â that bring us together, and thereby make us better acquainted, and better friends than we otherwise would be.

From the first appearance of man upon the earth, down to very recent times, the words “stranger” and “enemy” were quite or almost, synonymous.Â  This has not totally disappeared. The man of the highest moral cultivation, in spite of all which abstract principle can do, likes him whom he does know, much better than him whom he does not know. To correct the evils, great and small, which spring from want of sympathy, and from positive enmity, among strangers, as nations, or as individuals, is one of the highest functions of civilization.

To this end I contribute in no small degree.Â  IÂ make more pleasant, and more strong, and more durable, the bond of social and political union among us. Again, if as Pope declares, “happiness is our being’s end and aim,” our Fairs contribute much to that end and aim, as occasions of recreation — as holidays. Constituted as man is, he has positive need of occasional recreation; and whatever can give him this, associated with virtue and advantage, and free from vice and disadvantage, is a positive good. Such recreation our Fairs afford. They are a present pleasure, to be followed by no pain, as a consequence; they are a present pleasure, making the future more pleasant.”

I am speechless, stunned, unable to continue.Â  Stern has affected me to my very soul.Â  Who knew that the Janet-Jackson-Vagina-Head could speak so fluently and deliberately to the core of, not only American existence, but the world as we know it.Â  I am in awe of his being and at one with his thoughts.Â  Howard, I must have you!