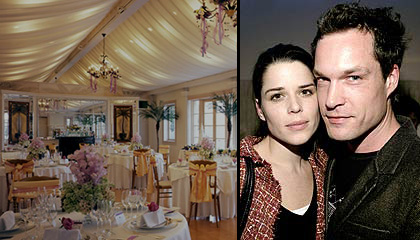 Scream actress Neve Campbell and British actor John Light got hitched this past weekend & we hear it was hot!

Neve’s rep is confirming the wedding, saying, “Neve was married in a small ceremony in Malibu on Saturday.”

The couple met back in 2001 on the set of an indie film ther were working on together, Investigating Sex.Â  Well, that does make for a good story, eh?

Apparently when 32-year-old Light proposed to 33-year-old Campbell in February 2006, he got down on one knee & recited ole Willy Shakespeare.Â  Gush, gush.Â  Well, he’s British, so they probably quote Shakes in their sleep.

This will be #2 marriage for Neve, who was married to Canadian actor Jeff Colt for more than two years.Â  Here’s hoping this one’s the one, Neve!Â  Congrats to the happy couple!