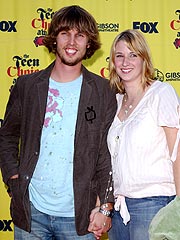 Gosh! Napoleon Dynamite‘s Jon Heder & his wife Kristen are expecting their first child together. 28-year-old Heder first hinted at the news yesterday and it has now been confirmed to People magazine.

Jon & Kristen who met when they were both students at Brigham Young University in Utah, have been married since 2002.