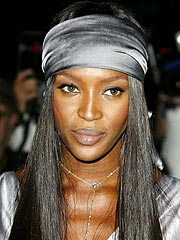 Naomi Campbell, supermodel, lost her poise at the airport — assaulting a police officer, and then spitting at other cops who came to the scene. (This is her second assault charge.)

So not glamorous, though her reps say that she was practically provoked. She was flying to L.A. for a memorial service, understandably distressed by the sad circumstances of her flight, when the airport lost her luggage. Police, on the other hand, said the was “obnoxious” from the beginning because she wasn’t allowed in the VIP lounge.

She was taken into custody and then released on bail.