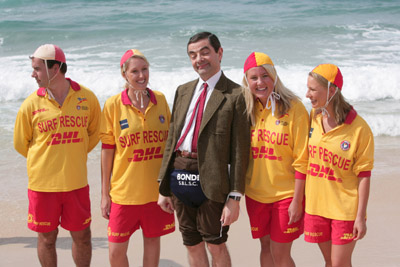 Mr. Bean, or if you prefer- actor Rowan Atkinson, was spotted in Sydney, Australia Wednesday morning at Bondi Beach in order to promote his new film, Mr. Bean’s Holiday.

Atkinson showed up in Bean’s trademark tweed jacket & red tie as he dipped his white toes into the ocean with the Bondi Beach lifeguards surrounding him.Â

Bean arrived by bicycle to the popular beachÂ & was all smiled as he waved to a large group of onlookers before making his way to the beach.Â  The Englishman had but a few words, as usual, to say about his visit to Australia.

“The weather’s hot, but the water’s very cold.”

As to whether he was enjoying Bondi Beach, Bean revealed, “Oh, I love it. It’s the best Bondi Beach I’ve ever been on … it’s a nice place for a holiday.”

Mr. Bean’s Holiday movie will be released in the U.S. September 28 of this year, however the Aussies get him a bit earlier this year, with the film being released nationally at the end of March.Â  Poor us, having to wait that long.