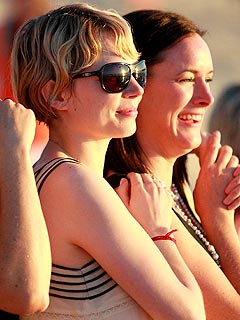 In a poignant ceremonyÂ  Michelle Williams and other mourners bid a final farewell to Heath Ledger by diving into the ocean after the cremation service. “It’s what Heath would’ve wanted.”

Many of them laughed and splashed in the water, but the mood shifted considerably as the sun descended. The crowd headed to the shore, standing in line with linked arms, saying goodbye to one of the most promising — and beloved — actors in Hollywood.

Observing Williams, one mourner said: “The sun goes down on our love, but it will never go down on Heathy.”