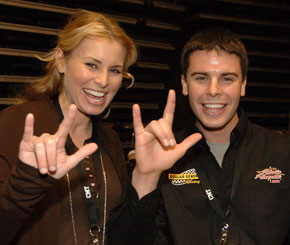 Taylor &Â Lamar met in JanuaryÂ at a charityÂ event.Â  Earlier this year Niki stated,Â “I looked at Burney and said to myself, ‘This is the guy I’m going to marry.'”

The ring is a custom job with a 2-carat oval diamond held in an antique setting, designed by Jerry Lindsey of Brentwood, Tennessee.

We’reÂ so glad that Taylor has someÂ love in her life.Â  Back in 2001 Niki suffered from a near-fatal car wreck, but after over 41 surgeries the strong womanÂ & mother of two is back on her feet.Â  Taylor currently lives in Nashville, Tennessee where she owns a boutique called Abbie + Jesse’s.Â

Congrats to the lovebirds!