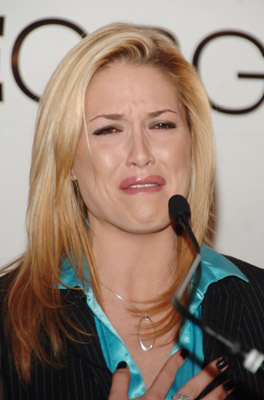 Drunkypants Miss USA Tara Conner has not been fired from her reign as the UnitedÂ State’s beauty queen.Â  Donald Trump, who owns just about everything, including the Miss Universe Organization,Â announced Tuesday that ConnerÂ could continue with her reign despite allegations of wild partying & drinking underage.

Apparently Trump was going to fire the young woman who just turned 21 on Monday, but decided to give her a second chance when her met her for a quickie, I mean met her right before the press conference, and changed his mind.

â€œTara is a good person. Tara has tried hard. Tara is going to be given a second chance,â€ Trump stated.

â€œIâ€™ve always been a believer in second chances.â€Â Â  Really?Â  Who knew that?Â  I don’t think the Apprentice staff knows that…

Ole Donald admitted to almost lettingÂ drunkypants Conner go, saying,Â â€œI expected fairly routinely that we would be terminating Tara as Miss USA. After speaking to herâ€¦I saw somebody with a good heart that tried really, really hard.â€

â€œShe left a small town in Kentuckyâ€¦and got caught up in the whirlwind of New York Itâ€™s a story thatâ€™s happened many times before to women and men who came to the Big Apple.â€

But it looks like this second chance is coming with a small price, rehab.Â  21-year-old Conner will be entering a rehab center soon, it has not be revealed if she will wait until after the holidays to accept this mission.

After realizing that Trump was not going to let her loose, Tara batted those eyes & cried,Â “In no way did I think it would be possible for a second chance to be given to me.”

“I’ve had a very big blessing bestowed on me. It truly takes someone with a wonderful heart, a heart of gold and a blessed soul.”

Just tell me one thing- How did a mug like that take home the Miss USA crown?

What do you think- Should Tara Conner have been de-crowned of her Miss USA duties?