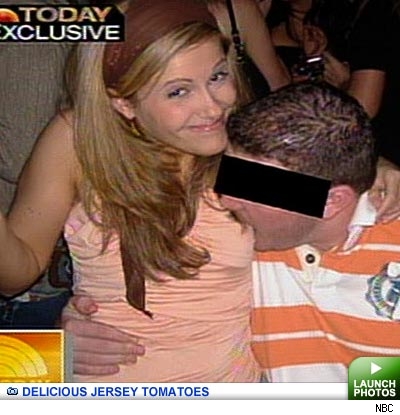 Miss New Jersey, Amy Polumbo, finally revealed the alleged blackmail photographs of her Thursday on the Today show.Â  While we were all expecting something rather hotÂ & X-rated, the pics actually turned out to be cute rather than hot & with only a PG-13 rating.Â  It’s all just too bad, if you ask me.

Polumbo revealed the photos to the country yesterday of her boyfriend biting her clothed nipple while she wears an expressionÂ of, “Well, what can you do?” & a pic of her clothed legs spread wide on a limo.Â  Certainly not reallyÂ racy stuff.

Amy decided, bravelyÂ I think, to show the pics to the public beforeÂ a meetingÂ with the New Jersey pageant officials that will determine theÂ fate of her beauty crown.Â

I say she gets to keep the crown, just so long as she does something naughty with it!