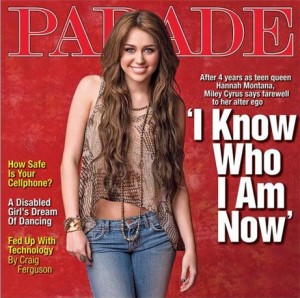 She was on the cover of Parade’s March (third week) issue in casual jeans and a belly-baring top. Other than the usual talk of career, love, and family, there was one thing that made fans raise eyebrows.

Miley Cyrus is steering clear of the country scene. As her Disney character Hannah Montana would say: “Say what?!”

“It scares me, that’s why,” she said in the interview when asked about her ditching the country music genre. “It feels contrived on so many levels. Unless you’re wearing a cowboy hat and cowboy boots and singing and whining about your girlfriend or boyfriend leaving you it’s not going to sell. I think that’s why my dad finally got out of it. You have to wear those cowboy boots and be sweet as pie. It makes me nervous, the politics of it all.”

Without the cowboy hat and country flavor, who in the world is the real Miley Cyrus now?