.
You are here: Home / Celebrities / Miley Cyrus Reveals Ear Tattoo Has Been Around For A While 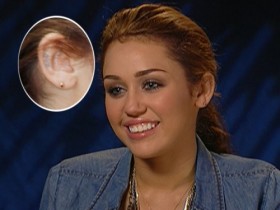 Miley Cyrus has an ear tattoo that’s been gaining quite a bit of buzz this week, however the tattoo may actually be a few months old.

According to PopCrunch, the tattoo which is composed of the word “Love” is located on Miley’s right ear (pictured) and was spotted this past Wednesday while Miley was at the Los Angeles International Airport.

Miley was asked about the tattoo and she had this to say:

“Everyone’s a little behind the times. I’ve had this for a few months and no one’s ever noticed.”