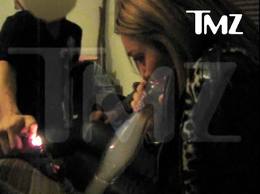 A source close to the incident told TMZ that a college student who came into possession of the video reached out to Miley’s reps and asked if they wanted a copy of the video, Miley’s reps then reportedly discussed an even exchange.

A rep from Miley’s team eventually headed out to the students campus and offered them a brand new MacBook Pro for their old Mac Book Pro which contained the video, the student agreed and made the swap. It’s reported that the same reps then made another computer swap for another student who had the video but eventually enough copies existed and the video leaked.

No word yet on why money didn’t swap hands, even though the student probably could have made a killing by selling the video to one of the many popular celebrity reporting outlets.