.
You are here: Home / TV / Mike “The Situation” Sorrentino Could Be Close To New MTV Contract 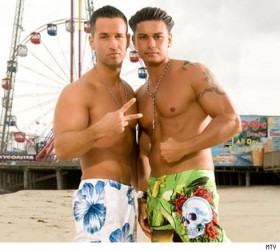 Mike “The Situation” Sorrentino is already making $10,000 an episode to act like a total moron on MTV’s hit TV show Jersey Shore and now we’ve learned that his contract for further seasons could reach much higher.

Under MTV’s new plans, season two would be broken up into seasons 2 and 3 (in which Sorrentino is already making $10k per episode), which means the next episodes to be shot for season 4 would pay Mike the larger sum.

According to sources, MTV wanted an answer by this past Thursday, but have given him more time to mull it over, which shows their dedication to keeping “The Situation” on their network.