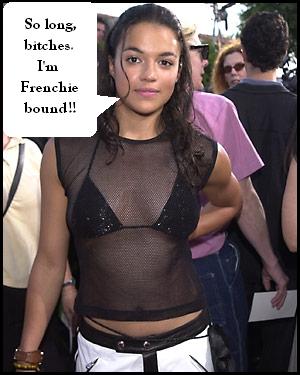 Michelle Rodriguez is free & so are well, unless you’re French.Â  Rodriguez has been released from prison after serving just hours of her 60-day drunk driving sentence.Â  Michelle celebrated by getting drunk & driving, I imagine.

The Lost star checked herself into a Los Angeles jail last Thursday only to be released after just 4 hours & 27 minutes behind bars.Â  I guess she was as annoying there as she is in the reality TV world and they decided to do themselves a favor.Â  Apparently the quick release was due to overcrowding & budget problems in the Los Angeles jail system.

Well if Michelle lives up to her word, the US is done with her as she is with us.Â  Before reporting to jail Rodriguez told the press, “I’m moving to France… People don’t bother you there. I do what I got to do and then I leave the country and never come back.”

She’s moving a little slow on her promise, I’d have to say, as she was spotted ringside at the Ultimate Fighting Championship in LA Saturday.