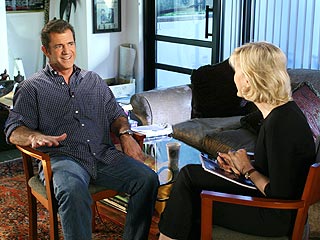 Mel Gibson told Good Morning America‘s Diane Sawyer thatÂ he’s been sober for 65 days and that he’s trying to put his Jew-hating July 28 drunk driving arrestÂ behind him.Â Â Mel is even calling the anti-Semitic rantÂ “the stupid rambling of a drunkard.”

50-year-old Gibson revealed to Sawyer that he had started drinking again two months before being pulled over by the police in Malibu.Â  Here’s Mel now.

“All of a sudden in a heartbeat, in an instant, on an impulse, somebody shoves a glass of Mescal in front of your nose and says, ‘It’s from Oaxaca.’ And it’s burning its way through your esophagus and you go, ‘Oh man, what did I do that for? I can’t put the toothpaste back in the tube.'”

In August Mel pleaded no contest to a misdemeanor charge of drunk & was sentenced to three years probation, was barred from driving for a three-month period & had to pay a fine ofÂ $1,300- which I’m betting he can afford.

Responding to those who shun him professionally for his drunk anti-Semitic comments, Mel stated,Â “I feel sad because they’ve obviously been hurt and frightened and offended enough to feel that they have to do that. Um, and it’s their choice. There’s nothing I can do about that.”

“I’ll always continue to work. I’ve never much depended on anyone but myself, as far as that goes. And, hey, I’m not under the illusion that everything’s just going to be hunky-dory work wise forever. I’ve never been under that illusion. Things could go away tomorrow.”

What wouldÂ Mel like to tell his critics?Â Gibson said, “Give me a chance to show you who I am?”

“Well, hopefully, in time they’ll know. And, you’re powerless over everything really â€¦ All you can do is take another step, keep breathing.”

And watch out where he’s breathing, that can be some stankin’ anti-Jewish drunk breath you’re getting.