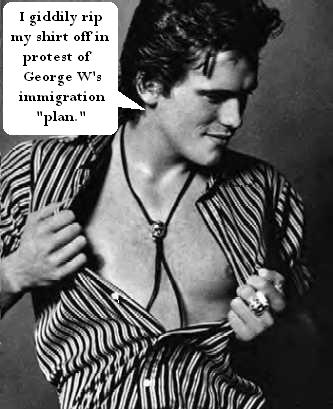 Dillon went on to state that he believes that the Bush administration has forgottenÂ theÂ roots of the country and is stunnedÂ by plans to build an actualÂ fence along theÂ U.S. & Mexico borderÂ in order to curb illegal immigrationÂ to the States.

Dillon reveals, “If we deny other people coming to our country then we’re denying everything that America stands for.

“I feel that way especially with our neighbors in Mexico.

“It’s complicated. I don’t have a solution and I don’t pretend to have one.

“We’ve gone backward in many respects.”

I’m glad Matt Dillon has found something worthwhile to be passionate about.