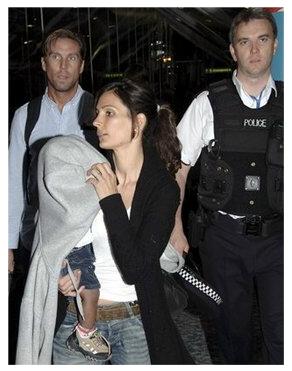 Well, we have aÂ Madoption update,Â it looks like 1-year-old Malawian DavidÂ Banda has arrived in the UK via South Africa on the charteredÂ flight that left Monday.

Police officers were seen escorting the infant off a British Airways flight this morning.Â  David was carried off the Boeing 747 in the arms of an unidentified woman who covered his head with a gray coat.

Three armed officers along with airline & airport officials escorted the madoption party through Heathrow’s Terminal 1 to the baggage hall where they were promptly pickup up & driven off in a silver Mercedes minivan.

MadonnaÂ & her hubbie Guy Ritchie were not seen at the scene.Â  And thus begins the 18-24 month temporary custody of the little boy David Banda by his caretakers, a pop diva & a director.