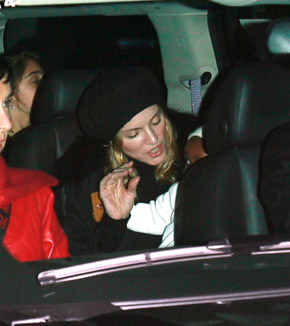 Anyhoo, Madonna was spotted recently pulling a Britney Spears.Â  Nope. she didn’t shave her head &Â gets lips tattooed to her wrist, the queen of pop did not even use a car seat recently while adopted son David Banda was in the car.

Apparently on March 2, the 48-year-old mom was snapped taking off in her Escalade ESV without even buckling-up her 17-month-old David.Â

“There was no car seat,” an insider reveals.

“She sat in the middle row, and they left with David on her lap.”

Reps for the singer insist that “proper security measures are always taken for Madonna’s children.”

Ummm, well, from the looks of this image, reps, I’m going to have to disagree.

Here’s hoping that Madonna doesn’t do any more of this following in Britney Spears’ footsteps business.Â  I just don’t think I could handel a bald Madonna, could you?