.
You are here: Home / Mischief & Mayhem / Madonna Gets Rowdy at the British Comedy Awards 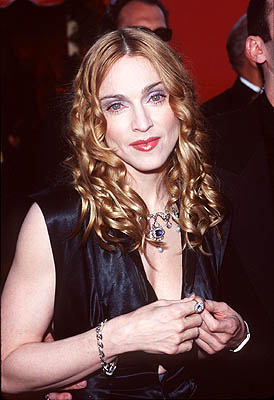 The other night at the British Comedy Awards Madonna made a surprise appearance.Â  The appearance at the awards show was a hit with the Brits as she presented Borat’s Sacha Baron Cohen an award for his recent movie.

“Are you stopping there, or getting more? When I went to Africa, all I got was a wallet.”

Wow, how funny.Â  You could have cut the air with a salmon.Â  A somewhat shaken & furious Madonna shot back, “You might go home with a black eye!”Â  See the video here.

After the awards ceremony, Madonna was nowhere to be seen at the after-party.Â  I guess she was still licking her wounds, eh?