.
You are here: Home / Career Moves / M. Night Shyamalan Set to Creep Kids Out with ‘Lady in the Water’ 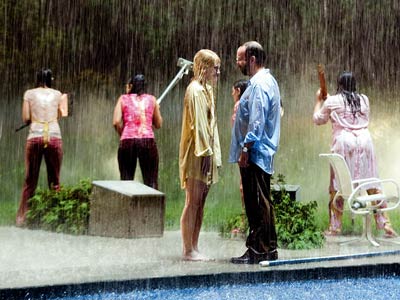 Film director M. Night Shyamalan, what a fantastic name by the way- I love it, has crossed off his list ‘Creep out the young adult & adult world at large’ and is moving on to the next item on his list, ‘Creep out theÂ young children of the world’.

Shyamalan is releasing a children’s book June 21 entitled “Lady in the Water“.Â  The book was originally written as a bedtime story for his children and is now publishing the picture book as well as releasing a film of the same name.Â  It is interesting to ponder the parenting of M. Night, it’s like trying to imagine Stephen King tucking in the kids at night.

The tale will feature illustrations by Crash McCreery (another wonderfully original name) who has worked as a character designer on such film as Jurassic Park, Pirates of the Caribbean & Shyamalan’s own film The Village– which left movie-goers alike wondering what happened to the M. Night Shyamalan genius.

The story of the book & film centers on an apartment building superintendent who, while maintaining the pool area, rescuesÂ what he thinks is a drowning woman.Â  When the super discovers she is actually a character from a bedtime story who is trying to make her way back home, he works with the tenants to protect this character from creatures (of course, did you really think there weren’t going to beÂ any creatures?) that are determined to keep her out of the story world.

The film version will be out at some point this summer sending chills down all of our backs.Â  Paul Giamatti will take the role as the superintendent and Bryce Dallas Howard the role of the Lady in the Water.Â  Paul Giamatti- he’s always playing the ugly, down-on-his luck guy.Â  At least he has some big boobies to play with at home.