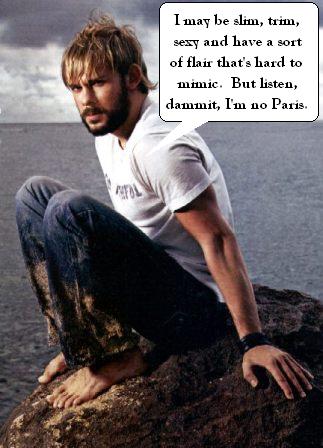 29-year-old Lost star Dominic Monaghan, he’ll always be Merry the hobbit to me,Â thinks he’s better than our sweetpants Paris Hilton.Â  The actor, who we cannot call a celebrity at this point, detests celebrities who point the spotlight at themselves.

Monaghan insists, “I’m not like Paris Hilton.Â  I don’t play that game of ‘Please leave me alone’ and then go to the Ivy and cry my eyes out.”Â  Poor Dominic, it looks like he has a problem with showing his soft side.

“I do say, ‘I’m not interested.’Â  I don’t have some sort of party scene or anything like that.Â  It’s fine if people play that game, but for me that’s something I try to keep at arm’s length.”

Hmmmm…Â  I’m not sure we would even care if Dominic Monaghan did have a party scene.Â  But I would be interested in seeing that arm’s length.