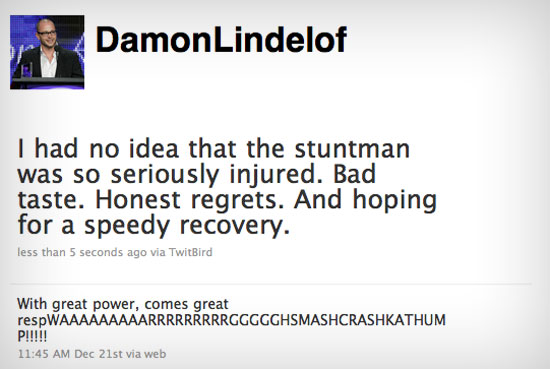 Damon Lindelof, the man who created the hit show Lost with J.J. Abrams has apologized for remarks he made in regards to the stuntman who was hurt on the stage of the under production broadway show Spider-Man: Turn Off The Dark.

After the actor/stuntman fell 30 feet into a pit, Lindelof Tweeted:

The stuntman who fell the rather large distance had to undergo back surgery and his career might be over, after realizing his mistake regarding the seriousness of the accident, Damon posted another Tweet:

“I had no idea that the stuntman was so seriously injured. Bad taste. Honest regrets. And hoping for a speedy recovery.”

A little insensitive? Sure, but at least he realized the error of his ways and acted in kind.