.
You are here: Home / Celebrities / Lindsay Lohan / Lindsay tells all 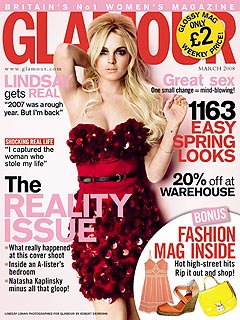 Lindsay Lohan opens up to Glamour magazine about her rehab struggle — which continues long after she let the Cirque Lodge.

She’s letting go of some bad relationships. “There are friends that have been hard to hang out with because they’ve gone done a different path.” She’s also learning to sharpen her instincts and choose her company wisely. “But it’s hard because I’m the kind of person who wants to trust everyone.”

Lindsay is also sympathetic towards Britney Spears and Amy Winehouse. SHe understands how difficult it is to be in the spotlight and how you can lose yourself — and still feel incredibly lonely despite a crowd of fans and hangers-on.

“I’m fine being alone during the day, but I hate being alone at night. I like having friends around me, but now I’d much rather be at home.” She now spends more time watching TV, writing in her journal and generally re-centering herself. “That’s not to say I’ll never go to a club again,” she says, “because I’d be lying.”

She says that even when you’re famous — with an instantly recognizable face — most people never know the real you. “People think I’m not a good person … actually I am.”