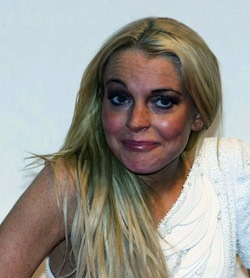 It’s been disclosed by a source close to Lindsay Lohan that the troubled star has been “doc shopping” in an attempt to purchase a dangerous combination of prescription drugs.

The source told TMZ that:

“When one doctor says no to refilling a prescription, she will go to the next. It’s a whole process to get what she needed.”

It was also discovered that Lohan may have up to six different doctors at one time, including in various cities from Los Angeles to New York.

If doc shopping isn’t enough, one of her old rehab facilities still providers her with prescriptions.

So what drugs is Lohan allegedly taking, how about, “Zoloft (antidepressant), Trazodone (antidepressant), Adderall (to control ADHD), Nexium (acid reflux) and the very powerful and dangerous painkiller Dilaudid.”

Even if she only ends up spending 30 days in jail, it will prove quite the painful experience as her body begins to detox.