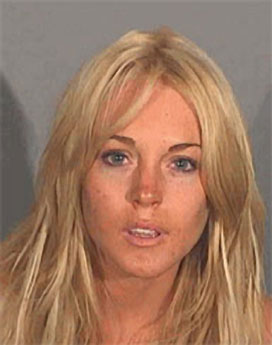 OMG!Â  Isn’t everyone just sick to freeking death of Lindsay Lohan screwing it all up?Â  With the world at her fingertips who think she can actually act,Â money in the bank & a killer bod,Â LL just doesn’t get it, does she?

Apparently Lohan is in the throws of addiction as well as stupidity, asÂ LL asÂ arrested again for not only another DUI but cocaine possession as well.Â  Damn, the girl knows how to get into trouble, doesn’t she?Â

Mother Dina Lohan was quoted as saying,Â “I am sick over this. My children, my family, we are like prisoners in our own home because paparazzi [are stalking us] outside [our] home. Lindsay is in a safe place. And we are trying to strategically work out our next step. We are doing everything in our power in support of Lindsay and I won’t give up — this is my daughter and we love her. We are waiting for the press frenzy to die down and leave her alone. And please respect our privacy.”

Lindsay’s father has refused to comment over the whole situation, except to say to stay the hell away from him & his daughter, he is currently on parole so I’d believe his ass.

With Lohan already facing charges for previous DUI, this added trouble isn’t coming at a very good time.Â  What to you think will come of LL?Â  I’m just not thinking that she’s going to look so good in orange for the rest of her life…