.
You are here: Home / Engagements & Weddings / Lindsay Lohan & Harry Morton May Be Engaged 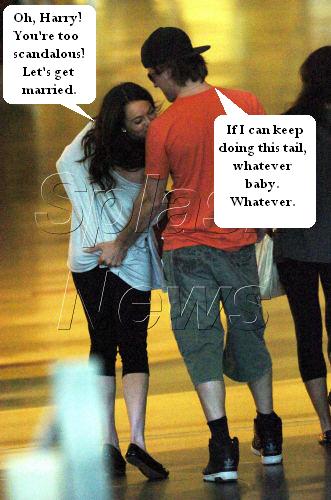 You never know who to believe, but reportsÂ are busting at theÂ seams stating that Lindsay Lohan’s boyfriend of four months, Harry Morton has purchased an engagement ring for the teen queen.

If this is true, then Lohan is set to become a member of the Morton family empire.Â  Morton’s father, Peter Morton, is the chairman for Hard Rock Hotels.

Morton’s aides are in fact backing up partÂ ofÂ the claims.Â Â AÂ Pink Taco spokeswoman stated, “I can confirm that Harry was shopping in Cartier, but what he purchased I cannot confirm. If it was in fact a gift then that’s between him and whomever the gift is for.”

You know what?Â  I’m thinking Harry boy must have been planning ahead for the holidays, probably a special gift for his favorite great aunt.Â  If Lindsay got engaged to all the relationships she’s have over the past year, she would top Johnny Depp’s record by far.

But if this news does turn out to hold a bit of truth, maybe Morton can get Lohan to the damn set on time.