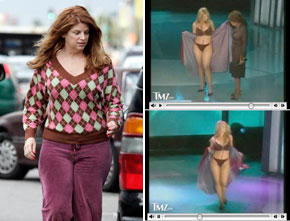 A year after 55-year-old Kirstie Alley made a pledge that she would come to the Oprah Winfrey show wearing nothing but a bikini, the deed has finally been done.

On Monday Alley showed up in a red bikini and received a standing ovation, see video here– it’s actually pretty spectacular.Â  Remember how Kirstie looked a year ago?!

The first time Alley ever opened up about her weight struggle to the public was on Oprah back in 2004Â when she weighed over 200 pounds.Â  Following the show, the actress quit smoking & vowed to change her lifeÂ & her body.

When Kirstie bared her new bod for Oprah, the talk show host stated, “You look beautiful.”
Â
Alley responded later in the show, saying,Â “I don’t think women ever feel like we’re good enough.Â  We don’t feel like we’re thin enough or pretty enough or smart enough or work hard enough â€¦ We all are good enough and we look good enough and we are not our bodies, you know?”
Â
Alley has been keeping track of her weight loss on her Jenny Craig blog. In October, KirsiteÂ posted:
Â
â€œThe most important reason I want to wear a bikini on Oprahâ€¦is because if I, a 55 year old woman can look even half way decent, imagine how all of you could look in a bikini. Then all of us can breathe a little easier. Hell, Iâ€™ll never look like Giselle, I never did! But maybe close to Bridget Jones or a Dove girl or something that is just fine and healthy and happy with no surgery, no lypo and no drugs-thatâ€™s saying something!â€

Well, I have to say, I’m impressed, Kirstie.Â  Looking good!